Over a week since the polls were, in the majority, proven to be wildly inaccurate and the nation witnessed the first Conservative majority since 1992, we look back over the first of our 60 Second Surveys.

In three short questions we wanted to develop an understanding of where teachers saw themselves on the political landscape, who they believed had offered the best education policies and finally what they thought was the most important education issue for the new government to address.

Well, perhaps unsurprisingly, the results of our survey showed that there would be some disappointed faces following Friday 8th May.

With our first question we wanted to set a benchmark for our respondent political leanings. As an anonymous survey (which will be the case for all of the 60 Second Surveys) they were able to give us an unadulterated and honest answer to get us started. 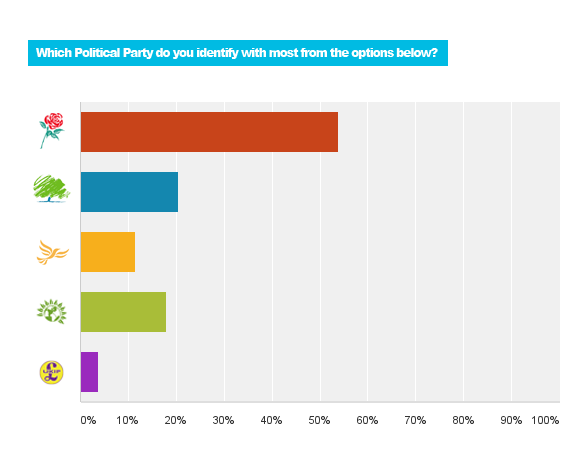 Unsurprisingly there was a heavy shift towards Labour, who took well over half of the vote.

With this as a bench mark, we asked how staff in the education sector were influenced by each of the party’s education policies. 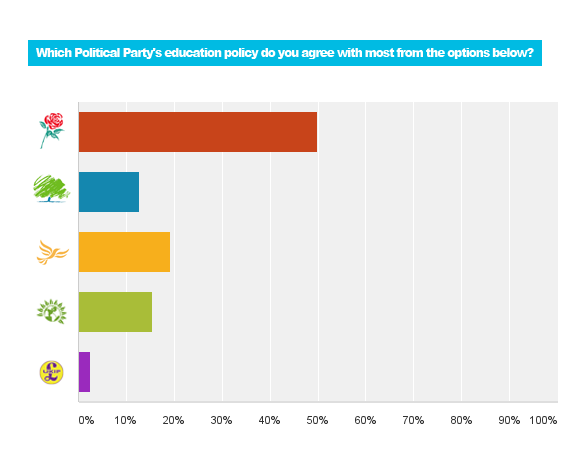 Showing a dip in support for both Labour and Conservatives, the Liberal Democrats, unlike their fortunes on Election Night, saw a rise in popularity.

Finally, we asked our teachers to describe in less than 25 words the education issues they felt it was most important for the next government to address.

Perhaps unsurprisingly, funding was at the forefront of most respondents’ minds before the election. A number of them, deciding that repetition was the best way forward, used the answer box to repeat the word “funding” 25 times. Sadly, if the answers to question one and two are anything to go by, the results that Friday morning won’t have been met with much cheer. 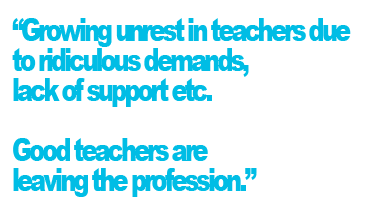 Beyond this, there were concerns that teacher’s time was being undervalued and that political interference (including a few mentions of “political football”) has reduced the value of a teachers’ input, focusing solely on the outcome.

Coupled with the intense pressure piled on teachers by higher powers, there were great concerns that the profession is becoming less desirable to new teachers and those already in the sector were eager to leave due to, amongst other things, a lack of support in the role. Many respondents wanted to see an improved level of support for the profession as a whole, including many calls for developing a greater means to reduce teacher workload.

The results of the survey, whilst managing to be at times both enlightening and expected, often served to reinforce the work that SAM Learning has undertaken over the years to champion both teachers and the teacher / student relationship, reducing the their workload where we can.

School funding is also a subject which regularly features in the SAM Learning office and when talking to thousands of teachers across the UK. As such, we’re consistently working to increase the value of our service by improving, evolving and adding to it.

If you consider these issues to be at the forefront of your school day, why not get in touch with one of our friendly account managers and see how SAM Learning can help your school.

Stay tuned – in our next 60 Second Survey, we’ll be delving deeper into some of the concerns raised here. Our main focus will be “Time” and how teachers use it. Keep checking back for the results and our quick evaluation.

BBC Bitesize Daily – in partnership with SAM Learning
May 22, 2020